This is the second post in a series on exactly what you can do with Note Trac. In the previous post we learned about creating text notes which is a feature that is available in both the basic and premium subscriptions. Today we will learn about creating checklist notes which is a feature only available in the premium subscription. If you’d like to be able to start using checklist notes you can go premium for the reasonable price of $8 / month or $86.40 / year.

So lets dive into checklist notes as we continue to learn how to use Note Trac to trac your life without wondering who might be tracking you.

With a Premium Note Trac account you are given the ability to create two types of notes, a text based note and a checklist note as the following screenshot demonstrates and as we mentioned in the first post in this series. 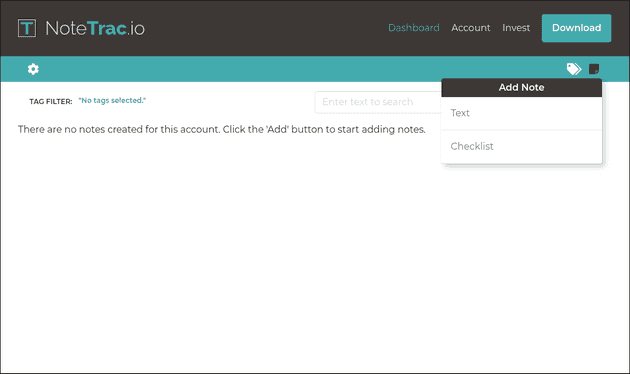 If you click the “Checklist” menu item you will be presented with a form to add a new checklist note to the Note Trac Dashboard as show in the following screenshot: 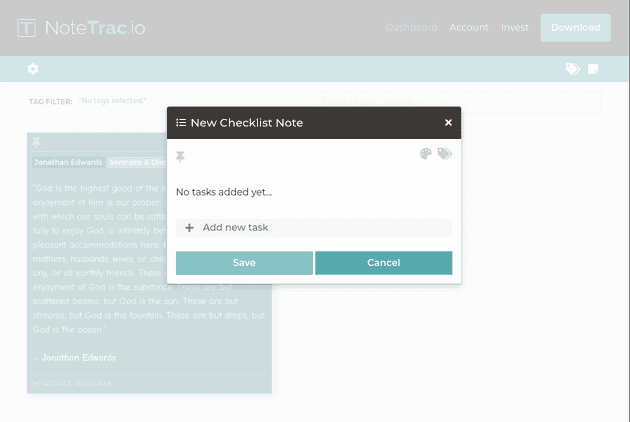 You will noticed that instead of a text area to capture a text note this form contains the ability to add, edit and delete tasks and this is in-line with what one would expect for creating a checklist note that you’d use to keep track of a simple list of ToDo item’s.

In order to add a new task you will need to click on the ”+ Add new task” button which will display an input field in the form for you to enter the task name as shown in the following screenshot. 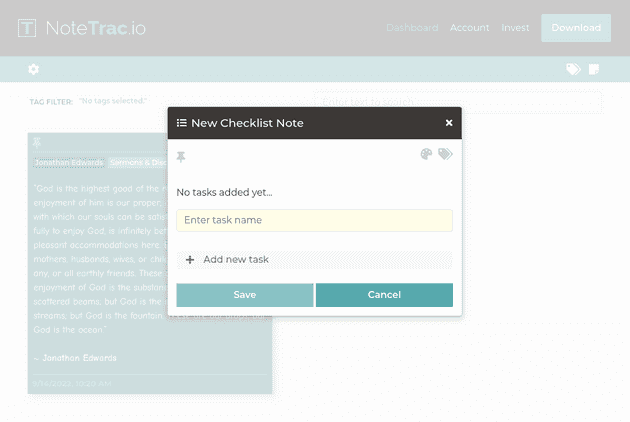 Once you have entered the task name you can save it to the form by either by hitting the tab or enter keys on your keyboard. Once it has been saved it will be displayed similar to the following: 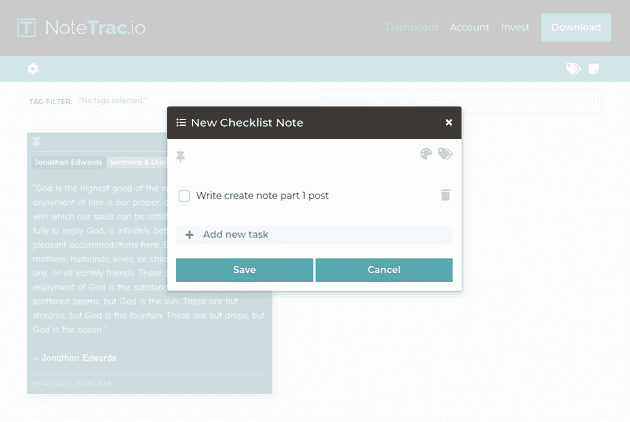 Notice that there is a checkbox next to the task as well as a trashcan icon. We will discuss these more in just a moment. 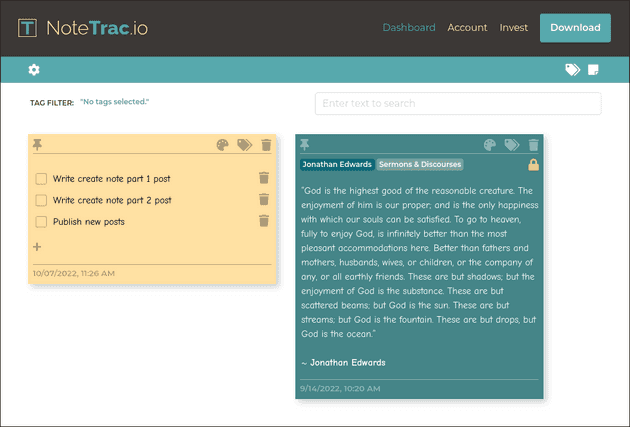 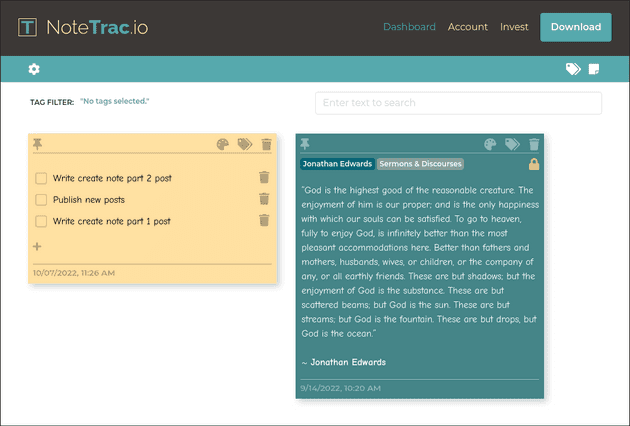 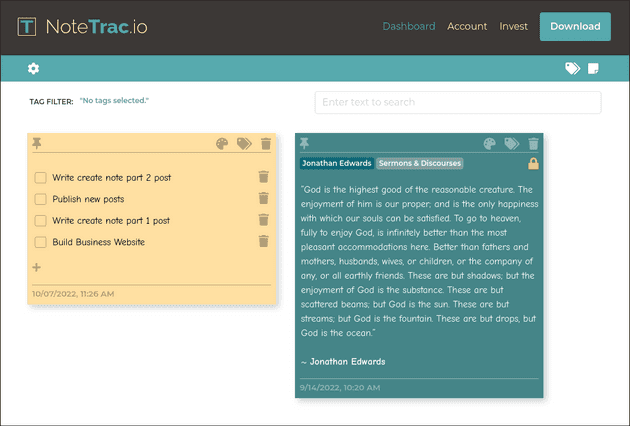 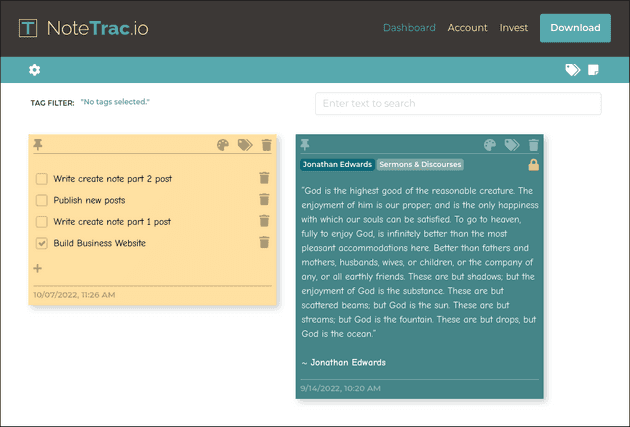 An import part of managing a task list is the ability to clear off tasks that you no longer want to see, this is what the trashcan icon is for next to each task in the checklist. If you click that icon the corresponding task will be deleted as shown in the following screenshot. The “Build Business Website” task was marked as completed in the last step. Now it has been deleted and no longer visible as shown in the following screenshot. Notice also that 1 more task has been marked as complete. 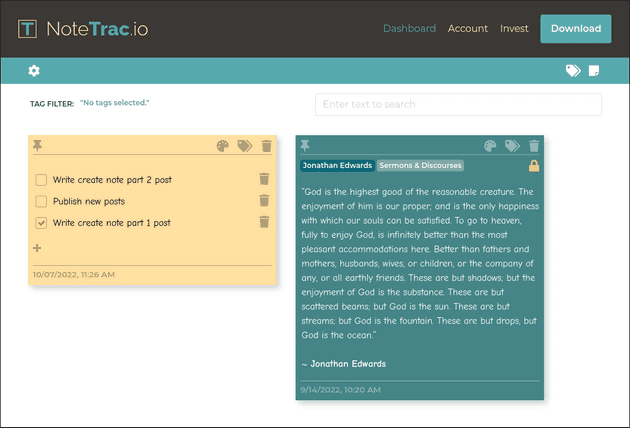 Just like in the previous post, we’ll add some tags to categorize the note so it is more easily referenced in the future. In this case we’ll add a todo tag and a work tag as is shown in the following screenshot. (Keep an eye out for a future post about adding/editing/deleting tags within notes and filtering notes based on their tags.) Also, now that the note is done, the tasks have been re-organized and marked as completed. All that is left is to publish this post! 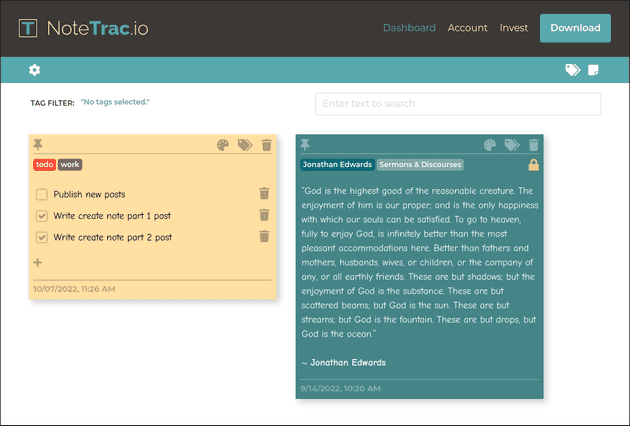 This is the second in a two part post on how to create a note with Note Trac. Keep an eye out for further posts on how to best utilize Note Trac to trac your life without wondering who is tracking you.